Summer can be hot, humid, and somewhat oppressive; however, with a hammock and the sounds of birds, it can also be a slice of heaven.  Most of the little woods is still wild and full of vines choking trees.  Sr. has be hard at work to turn some of it into a park.  For my and my hammock's benefit, for sure, but also to take down the vines that are trying to kill the trees.  Where the vines have been removed, the trees are definitely showing signs of improved growth.


Leaving some of it wild, however, provides food and cover for the rabbits that like to taunt the dogs.  Also provides cover and browse for the deer that like to visit.  Alas, it also provides habitat for the adorable but stinky skunks.

Flowers are starting to really come into their own this time of year.  Little yellow Rudbeckias are beginning to bloom around the edges of the woods.  Passion flowers are blooming among the weeds.  Queen Ann's Lace is starting to set seed.  And a few Honey Suckle blooms can be spotted here and there.


Some say that the power lines are an eye-sore, but I have come to see them as protection from suburbia coming too close.  The tree line on the left is 75 feet from the middle of the power lines - the closest they can build on the neighboring property.  Our fence line on the right is 75 feed from the middle of the power lines - the closest we can have trees or other structures.  That means that, should the wild acres next door to us be sold, the closes they can build houses to us is 150 feet.    I'm hoping that is enough buffer to protect our little bit of paradise. 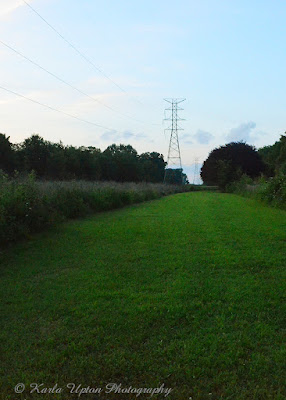 Posted by Unknown at 4:00 AM No comments:

Years ago someone gave me a few slices of (store bought) sun dried tomatoes.  I instantly fell in love - until I saw the price - over $20 a pound.  For someone who can eat dried tomatoes like candy - well, that was going to be a pretty expensive habit!  Tomatoes are prolific here, and even when mine drown or get stepped on by large puppies, they are abundant at the weekly summer farmers market.  Turns out, I can make my own for pennies on the dollar.

While in theory one could solar dry tomatoes in The South, the amount of rain that we normally get here in Middle TN combined with this years exceptional rain production means that solar is not a practical solution - it's warm enough, but too humid.  Even so, I wasn't too keen on spending several hundred dollars on a large dehydrator - what if this dried tomato thing was just a passing craze?

After much research, I found an under $100 version that had both temperature control and an integrated timer.  Both being particularly useful if you will not always be home during drying time.  Turns out that I really like that it tells me what temperature to use right on the lid - I know evernote and google would tell me - but just having it there is pretty nice.

So this batch started off as 3 pounds of Roma Tomatoes and a few slices from a tomato used for BLTs. Some of the tomatoes had a pretty dense core, so I cut the centers out of those.  But for ones that had softer cores, I just left them.  I hand sliced about 1/4 in thick - but some were thicker and some were thinner.  Being more consistent in slicing thickness probably would have improved the overall quality of the batch, but, well, even though some tomatoes got a little over done (turned black), they were still tasty.  No burn flavor at all.  And they were kinda crunchy instead of chewy.

Didn't think to take "before" photos.  This tray was edge to edge tomato rings with the tomatoes barely separated from each other.  They dried down to less than half size.  They will last nearly forever in the freezer.

My tomatoes have pretty much succumbed to Early Blight; however, it is only the beginning of tomato season at the Farmers Market!   And now, to go dry Serano hot peppers.  I dry the tomatoes in the house to capture that yummy tomatoes aroma.  I dry hot peppers outside so as not to burn my eyes from the "fumes!"

Between school and work and trying to get some sleep, the garden has fallen into quite some disrepair, by human standards.  The weeds and the bugs are enjoying, however.  Mother Nature never sleeps.


Rain 4 or 5 days out of every 7 has made this a horrible year for Cedar Apple Rust.  Some of the apple varieties have been hit worse than others.  Having wet, humidity holding weeds all around, doesn't help.  Cleared the weeds away from this one today.  It's the only one that hasn't shown signs of growing new leaves since the initial onslaught.  I hope I can save it.

Some of the apple trees got hit early on, but then recovered - difficult to see in this photo, but the tree below has regrown almost 100% of the leaves that it lost to Cedar-Apple Rust.  I know that better hygiene for the trees would help - and possibly some toxic gick spray.  So I will just have to  pay attention to who can survive this wet, humid, Southern world, and plant more of them.  Didn't have this issue in the desert!
One good thing about having a diverse and semi-wild garden is that, while one plant suffers from too much rain, another just gobbles up the rain and goes crazy.  Wild black raspberries are springing up everywhere with strong, 3-5 foot arching canes - nice and healthy for next year's production.  Alas, they are invading, and I have been chopping them down at every turn.  I am keeping 3 of the healthiest stands, however.  So if I can remember to cover them at the appropriate time, I will get to eat more of them.  But harvesting song bird viewings is not a bad yield for a garden.  And the blooms are like clouds of miniature white roses.

And then there are volunteers from plants grown on purpose in years past.  Nothing like a random Sunflower to brighten one's day.  Each year I say I'm going to plant them sooner, and plant more of them.  And I was saddened to think that I didn't plant any at all this year because of school and work and life in general.  And then Nature came along and sent me a few to cheer me.

So while the puppies stomped on many of the pepper plants, and rain and rain and more rain drowned the tomatoes and brought on early blight, the weeds entertained me today as I spent a hot, muggy, rainy, sticky, glorious day outside.  A rare treat, but now time to study - Managerial Accounting!  Ugh!
Posted by Unknown at 5:51 PM No comments: